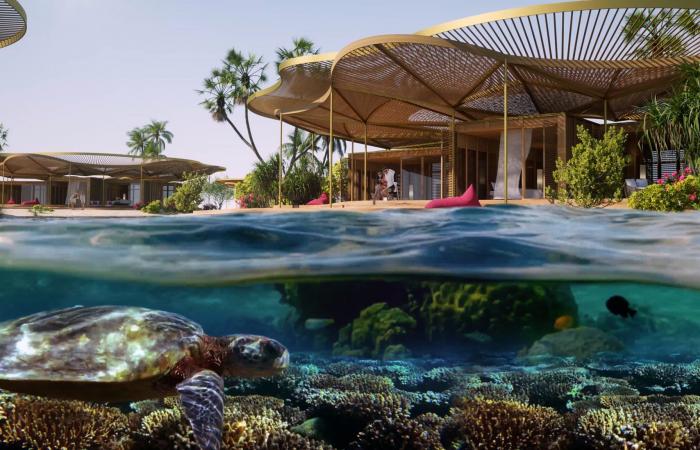 Jeddah - Yasmine El Tohamy - DUBAI: During the recent 2021 Budget Forum in December, Saudi Arabia’s Minister of Tourism Ahmed Al-Khateeb said the Kingdom is aiming to attract new tourism investments worth SR220 billion ($58 billion) by 2023, and more than SR500 billion by the end of the decade.

In 2019, Saudi travellers spent $22 billion travelling overseas. One of the ways the ministry is aiming to boost the Kingdom’s tourism revenues is to encourage Saudis to spend some of their tourism cash at home.

“We have reduced the leakage,” Al-Khateeb told Arab News in December. “In 2019 we launched 11 ‘seasons’ in Saudi Arabia and reduced travel outside by 30 percent. When we continue to do this, we will definitely reduce the leakage — Saudis will like to stay at home and they will enjoy the offering.”

One of the obvious ways to reduce the leakage is to give Saudi tourists attractions they can enjoy within the Kingdom’s borders. A prime example of this is the Coral Bloom project, which was announced on Wednesday by Saudi Arabia’s Crown Prince Mohammed bin Salman.

Backed by Saudi Arabia’s sovereign wealth fund, the Public Investment Fund (PIF), and part of the flagship development the Red Sea Project, Coral Bloom has been designed by the world-renowned British architectural firm Foster + Partners. Based on Shurayrah Island and shaped like a dolphin, the island is home to the world’s fourth-largest barrier reef system, untouched corals and a significant number of endangered species.

Set to include 11 hotels, the project has been welcomed by Saudi experts across many sectors, as both a strong addition to the tourism landscape and a positive economic force.

Talat Zaki Hafiz, an economist and Saudi Financial Association board member, said Coral Bloom stands alongside other mega projects announced by the government in recent years, including Qiddiya, The Line and NEOM. This latest addition “will add value not only from the social point of view, but also it will add value to the Saudi economy and to the overall GDP of the Kingdom,” he said.

The tourism sector currently represents around 3.5 percent of the Kingdom’s GDP and the Ministry of Tourism is hoping projects like Coral Bloom will help increase this to 10 percent within the next decade.

“I think Crown Prince Mohammed bin Salman is doing a great job in order to diversify the economy of Saudi Arabia, also at the same time trying to make this island unique in terms of architecture and lifestyle,” said Salem Alghamdi, a professor at King Saud University Riyadh and an analyst in the travel and tourism sector.

“I am just waiting for it to be ready. I will be one of the first visitors. It is going to be a great place to stay and spend quality time. It’s also a very good way to diversify the Saudi economy,” he added.

Echoing the theme of diversification, Dr. Majed Al-Hedayan, a financial analyst and legal expert, said the project “will be a front for global tourism in an unprecedented way” and it will also encourage “foreign investors to establish their investment projects” in the Kingdom, therefore acting as a catalyst for future investment in the sector and go a long way to helping the Kingdom achieve its goal of generating SR500 billion by 2030.

Around four percent of the Saudi labor force currently works in the tourism sector. Last year, The Red Sea Development Company, the developer behind Coral Bloom, conducted more than 850 face-to-face interviews with young Saudis and found 90 percent of them said they would be eager for a career in the travel and tourism sector.

Mazen Al-Sudairi, head of research at Riyadh-based financial services company Al Rajhi Capital, said projects such as those on the Red Sea will help make these career ambitions a reality. Al-Sudairi said the PIF-backed Coral Bloom project “aligns well with the other projects announced recently” and will “bring more tourism and generate local employment in the Kingdom”.

The resilience of the Saudi tourism sector was abundantly clear during the coronavirus pandemic. While the UN World Tourism Organization described 2020 as “the worst year on record in the history of tourism,” with the number of international tourists between January and October down 72 percent year-on-year, the Saudi domestic market bucked the trend.

In an April interview with Reuters, Al-Khateeb said that Saudi tourism could shrink as much as 45 percent in 2020. However, in September, he told Bloomberg that a sudden surge in domestic travel — 50 percent more than officials projected — helped save businesses and jobs, as well as boost the economy.

Dr. Osama Ghanem Alobaidy, an advisor and professor of law at the Institute of Public Administration in Riyadh, said the positive performance of the tourism sector during the pandemic is clear evidence that the goals set out as part of Vision 2030 are on track.

“To achieve economic diversification, Saudi Arabia is seeking to increase foreign investments, increase the participation of small and medium-sized enterprises in the economy, generate new job opportunities and create and develop some of the world’s most impressive mega projects, such as Coral Bloom.”

These were the details of the news Coral Bloom set to bring Saudi Arabia closer to $133bn tourism goal for this day. We hope that we have succeeded by giving you the full details and information. To follow all our news, you can subscribe to the alerts system or to one of our different systems to provide you with all that is new.