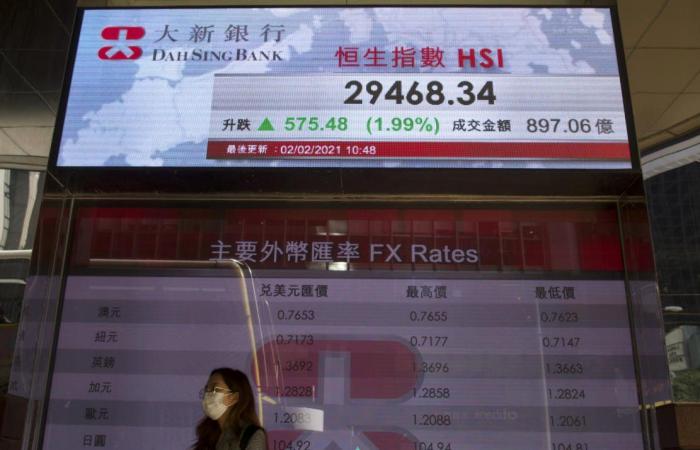 Thank you for reading the news about Most Asian markets extend rally as virus, stimulus optimism grows and now with the details

Jeddah - Yasmine El Tohamy - HONG KONG: Most Asian markets built on the week’s rally Wednesday, boosted by US stimulus hopes and signs of easing virus infections as well as improvements in vaccination programs.
Support was also being provided by hopes that the social media-fueled retail trading battle that rattled Wall Street last week appeared to be fizzling.
The gains follow a two-day surge as equities recovered from last week’s rout, though they were tempered by worries that valuations might still be a little frothy, while Hong Kong and Shanghai were hit as China’s central bank sucked more cash out of financial markets to avert a bubble.
Oil held up after hitting a pre-pandemic high on Tuesday but there are worries the improvement will give producers an excuse to begin lifting output again.
The Democrat-controlled US Senate voted 50-49 to begin the budget reconciliation process that will allow them to push through Joe Biden’s vast economic rescue package and avoid the filibuster that requires 60 votes for most legislation.
While the move will likely mean the new president will not be able to get the bipartisan agreement he called for, Senate Majority Leader Chuck Schumer said a “big bold package” is needed to avoid the long, drawn-out recovery seen in the aftermath of the financial crisis a decade ago.
“We are not going to dilute, dither or delay, because the needs of the American people are just too great,” he told reporters.
The move came after Biden held talks with 10 Republican lawmakers to discuss their $600 billion package that omitted several measures in his own $1.9 trillion proposal.
“We are still in the early rounds of stimulus discussions, but it seems certain Democrats will end up doing this deal all by themselves,” said OANDA’s Edward Moya.
And while he warned that a hike in the minimum wage — a key part of Biden’s plan — could hit small businesses, he added: “In the end, the economy will see at least a trillion dollars in stimulus via the budget reconciliation.”
The developments came as data showed infections and deaths in the United States — the worst-hit country — appeared to be easing, which experts said was down to better adherence to mask-wearing and social distancing, and the end of the holiday season.

Meanwhile, vaccination programs in the United States and the United Kingdom were picking up pace, though the European Union was struggling to get up to speed owing to a supply problem.
Total US vaccinations have now overtaken total recorded infections.
Stephen Innes at Axi said the slowing infections, improving immunizations and optimism about the stimulus were “the ingredients for a rapid recovery from the second quarter onwards are getting sweetly baked into the reopening party cake.”
All three main indexes on Wall Street ended up more than one percent, and Asia pushed its advance into a third day.
Sydney piled on more than one percent, while Tokyo, Singapore and Taipei saw healthy gains. Seoul, Manila, Wellington, Bangkok and Jakarta were all in positive territory.
However, Hong Kong and Shanghai bucked the trend after the People’s Bank of China tightened liquidity in financial markets to temper speculation in markets.
Observers said there was a sense of relief that the retail-buying surge from last week — in which amateur investors communicating through Reddit hammered short-sellers on Wall Street by pushing up the price of certain firms — seemed to be waning for now.
Struggling video-game store GameStop rocketed as much as 2,000 percent from the start of the year, costing some fund managers billions and leading to worries about a spill-over into other equities.
But the firm plunged Tuesday and the price of silver, which became the next focus of attention, dropped about 10 percent from an eight-year high.
“The fact that markets have cooled down a bit with the retail-trading frenzy, that’s giving a little bit of optimism,” Megan Horneman, at Verdence Capital Advisers, said.
Oil prices extended their rally after hitting a one-year high, helped by recovery hopes and a snowstorm in the United States.
But Axi’s Innes said OPEC and other major producers would be keeping tabs on the gains and could start to remove output cuts put in place to support prices after they cratered in the spring.
“The closer we shift toward Brent $60 one would have to assume it could be a potential game-changer as far as OPEC+ production cut mandate is concerned, with more producers pressuring to pump, pump, pump,” he said.

These were the details of the news Most Asian markets extend rally as virus, stimulus optimism grows for this day. We hope that we have succeeded by giving you the full details and information. To follow all our news, you can subscribe to the alerts system or to one of our different systems to provide you with all that is new.