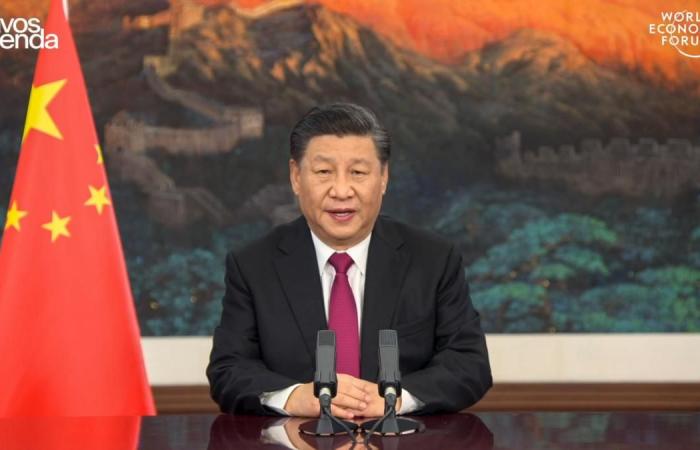 Jeddah - Yasmine El Tohamy - PARIS: Chinese President Xi Jinping warned global leaders at an all-virtual Davos forum Monday against starting a “new Cold War” while he championed multilateralism.
Representing the only major economy to record economic growth last year, Xi presented himself as the defender of multilateralism, as he did at the same forum four years ago when Donald Trump was about to assume the US presidency.
Without naming the United States, Xi seemed to have a message for Trump’s successor Joe Biden, who entered the White House just a few days ago, but who is not addressing the annual World Economic Forum (WEF).
“To build small cliques or start a new Cold War, to reject, threaten or intimidate others... will only push the world into division,” Xi told the world’s political and economic elite as the Biden administration plans to revitalize global alliances to counter China’s growing influence.
Trump had chosen open confrontation and verbal attacks, without tangible results for the enormous US trade deficit with China.
Though Biden may be dismantling one by one the controversial measures of the Trump era, he has nonetheless signaled the United States will closely look out for its own interests.
An executive order is to give US companies and products priority in contracting with the federal government as part of an overall plan to save industrial jobs by increasing investments in factories and workers.
Meanwhile, European leaders presented agendas of their own at the WEF — normally held in the Swiss ski resort of Davos but taking place virtually this year because of the pandemic.
German Economy Minister Peter Altmaier defended a controversial accord signed by the European Union and China in late December to provide increased mutual market access.
The deal duplicates “a lot of the arrangements that the US already has with China,” Altmaier said.
Herbert Diess, head of the German auto giant Volkswagen, which has several plants in China, noted that the country represented a great opportunity for European companies.
But some members of the European Parliament and activist groups say the accord should be contingent on Beijing’s ratifying international conventions banning forced labor.
And Kenneth Roth, head of Human Rights Watch, a non-governmental organization, commented on Twitter that Xi “promotes global collaboration on Covid-19, so long as it doesn’t involve investigating his three-week cover-up of human-to-human transmission in Wuhan, which enabled the virus to go global.”
A year ago, the emergence of a mysterious flu-like disease in China prompted few comments at the forum when it took place at its usual site in Switzerland.
A year later, the world is still struggling to contain the coronavirus, which has killed more than two million people and cost 225 million jobs, according to the UN’s International Labour Organization.
The world’s richest people have barely been touched, the non-governmental organization Oxfam charged.
Meanwhile, “it could take more than a decade for the world’s poorest to recover,” Oxfam said in the study titled “The Inequality Virus.”
Optimism raised late last year by new vaccines has been tempered by production delays and new variants, and many countries are again mulling lockdowns to stem the spread of the virus.
But European Central Bank chief Christine Lagarde nonetheless forecast that 2021 will be “the year of recovery.”
She said that while renewed economic activity “seems to be a little bit delayed,” it “should not be derailed.”
Other forum subjects broached on the first day was global taxation of digital giants, a priority for France that until recently has been opposed by the United States.
French Economy Minister Bruno Le Maire welcomed a more conciliatory tone from the new Biden administration on the subject.
He hoped that a multilateral accord under the auspices of the Organization for Economic Cooperation and Development could be reached by the middle of this year.

These were the details of the news Chinese leader Xi Jinping warns Davos forum against ‘new Cold War’ for this day. We hope that we have succeeded by giving you the full details and information. To follow all our news, you can subscribe to the alerts system or to one of our different systems to provide you with all that is new.