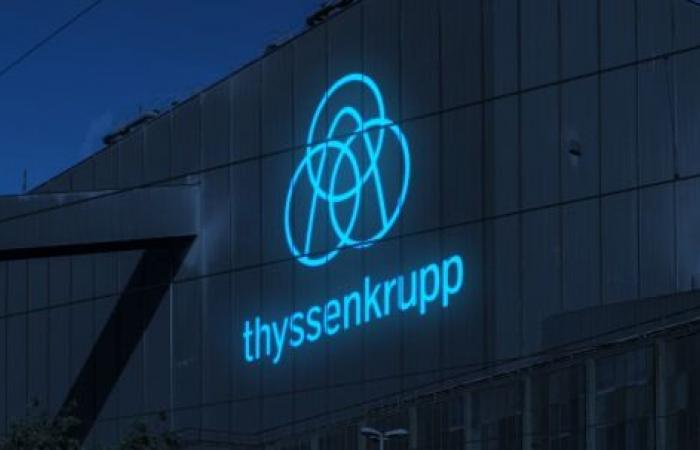 The long-established thyssenkrupp group is still up to its neck.

The corona pandemic has exacerbated the crisis that has been going on for years. In the current situation, the steel division turned out to be more and more of a millstone. Will the business be sold or are the Essenes sticking to their roots? The situation at thyssenkrupp, what analysts say and what the stock does.

THE SITUATION AT THYSSENKRUPP:

The corona pandemic hit the people of Essen at an inopportune time. Because actually boss Martina Merz had decided to radically rebuild the lurching company and get it back on track. In future, the focus should largely be on materials trading and industrial components. Everything else was made available. The management wants to keep as many options open as possible.

The renovation was to be financed with the 17 billion euros from the sale of the elevator division and the high debt to be reduced. But now thyssenkrupp is running out of time. The corona crisis thwarted the Essenes’ original plans, last year the group made a billion-dollar loss in its continued business.

The focus is on the traditional steel division. thyssenkrupp is currently examining all options for the business that has been particularly hard hit by the corona pandemic. Partnerships, a partial or complete sale are possible. The division struggled with the high dependency on the ailing automotive industry, the entire industry is under price pressure and groaned under too high capacities. Most recently, the first steel manufacturers and traders reported the first signs of recovery and an easing in prices, from which thyssenkrupp has not yet benefited.

At the same time, thyssenkrupp has to invest a lot of money in climate-friendly production. The current hype about hydrogen as an energy carrier for the production of “green steel” could, however, also hold promise for the future of the group.

thyssenkrupp had already tried to merge its steel business with Tata Steel Europe, but failed because of the European antitrust authorities. A prospective buyer who wants to take over the steel business recently contacted the British competitor Liberty Steel. However, it is unclear whether this will happen. The IG Metall union has already spoken out against it. thyssenkrupp has announced an exam and is now giving the British an insight into the books. A decision on the future of the division should then be made in March.

Meanwhile, the management continues to apply the brakes on costs. Instead of the previously planned 6,000 jobs, a total of 11,000 jobs are to be cut. That is more than every tenth job in the company. And it may not stop there.

If the steel business is not sold, it will need financial help for a single-handed renovation despite all savings efforts. Group boss Merz has already admitted that. Talks are being held with the federal government about money from the economic stabilization fund.

For years, market experts have been criticizing the billions in cash outflows at thyssenkrupp. Therefore, some analysts consider a sale of the steel division, which is largely responsible for this, not a bad solution. However, there are also critical voices.

The full sale could be visually attractive as it would further strengthen the balance sheet, wrote JPMorgan analyst Luke Nelson, for example. Liabilities would be reduced and liquid funds would be spared. However, Nelson gave among other things to consider that the sale to a competitor like Liberty Steel would increase the antitrust risks. In addition, important interest groups such as trade unions have already expressed their rejection of the proposed deal.

Analyst Dirk Schlamp from DZ Bank recently saw thyssenkrupp in a weak negotiating position. The offer price could be below the Group’s expectations. A Deutsche Stahl AG, together with Salzgitter, is currently not possible. However, the expert recently increased his vote to “Buy”. After the sharp slump due to the corona pandemic, there are now signs of a certain recovery in the steel industry. With a view to the second corona wave, however, there are still question marks about how sustainable the recent recovery will be. In the case of thyssenkrupp, a noticeable improvement in profitability can be expected from the second quarter of 2020/21, especially for steel.

The analysis company Jefferies is also on the buyer side. After the severe turmoil in the global steel industry in 2020, the worst since 2009, demand should rise again in the coming year, wrote analyst Alan Spence. In Europe, the surge in demand should come primarily from the automotive sector.

In addition, experts see great opportunities in converting production to “green steel” and the hydrogen business. Thyssenkrupp recently held an event for investors and presented its electrolysis business for hydrogen production there. The electrolysis segment offers considerable potential, according to Deutsche Bank analyst Bastian Synagowitz. That thyssenkrupp has high hopes in the business is also shown by the plant manufacturer Uhde, for whom the group had considered selling. JPMorgan analyst Nelson wrote after the investor event that thyssenkrupp had emphasized that even selling a minority stake was out of the question in the short term.

In the opinion of Jason Fairclough from Bank of America, thyssenkrupp is now in a position to equip large plants for the production of hydrogen using the electrolysis process. The question now is whether the shareholders would also recognize these values. He himself has so far estimated the value of these activities at more than four billion euros.

A look at the chart in the thyssenkrupp paper clearly shows the extent of the decline in recent years. From prices above the mark of more than 30 euros in mid-2011, things gradually went down. The group’s many problems pushed the course into the single-digit range up to August last year – and then Corona came this year.

The pandemic and worries about the company’s financial position dealt the price another blow – in the spring, a thyssenkrupp share cost significantly less than four euros at times. The paper was initially able to recover from this to over 7 euros in the summer. But that too quickly fizzled out. Concerns about the high financial requirements and further setbacks caused by the corona quickly caused this recovery to burst again. It was not until the expression of interest from Liberty and recently the hydrogen hype gave the papers a fresh impetus.

The papers currently cost around 8 euros. That means a minus of a third in 2020 alone and thus one of the last places in the MDAX. With a market capitalization of a good 5 billion euros, thyssenkrupp ranks in the middle of the index of medium-sized stocks.

These were the details of the news thyssenkrupp shares in focus: weal and woe depend on steel | 12/29/20 for this day. We hope that we have succeeded by giving you the full details and information. To follow all our news, you can subscribe to the alerts system or to one of our different systems to provide you with all that is new.