Faced with the giant Veolia-Suez, the public water authority is developing 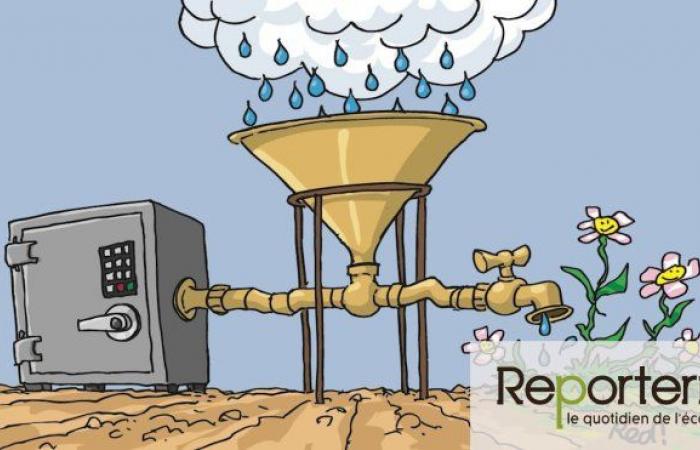 This is the economic soap opera of the fall: the possible merger between the multinationals Veolia and Suez. All the ingredients are there for a thrilling saga. The rush – some will speak of « forced passage » – with which the CEO of Veolia (originally Compagnie Générale des Eaux), Antoine Frérot, offered the giant Engie to buy back its shares in Suez, a competitor « historical » of his company, for the modest sum of 3.38 billion euros ; the outcry of Suez employees, determined not to let go ; the ambiguities of the executive, which officially opposed this takeover while doing nothing to prevent it… Latest episode to date, Thursday, November 19, justice suspended the acquisition operation – in the name of lack information and consultation of Suez employees ; this decision complicates theOPA of Veolia without however questioning it.

Embedded despite itself in this epic battle of French capitalism, many French municipalities do not hide their concerns. Because this merger project concerns all the communities that have delegated the management of their water to one or the other of its two groups. Our country is indeed a bastion of the privatization of blue gold: on a model similar to that of the motorway concessions, many cities have delegated the distribution of water and sanitation to large companies – Veolia or Suez mainly. Thus, nearly one inhabitant in six is ​​now served by a private operator ; the rest of the population living in a municipality which has opted for public management, we will come back to this.

Towards a water monopoly in France ?

However, the operation comes at a time when many delegation contracts are coming to an end. Hence the fear, for these communities, of finding themselves facing a giant Veolia-Suez which will be able to impose its conditions on them, in particular tariffs. « Today, when a community wants to delegate to the private sector, it can negotiate with several operators, said Gabriel Amard, co-president of the French Common Property Water Coordination, in an interview with Reporterre. If she finds herself facing a single juggernaut, she will have less room to maneuver, that’s clear. »

« A more concentrated market often leads to higher prices and reduces the market power of customers », also reported Senator Sophie Primas, during the hearing of the CEO by Veolia at the Palais du Luxembourg. Antoine Frérot then wanted to be reassuring: his company intends in fact to sell all Suez water activities to the Meridiam investment fund in order not to offend the competition authorities, who could take a dim view of the creation of a private water monopoly in France.

Created by Thierry Déau, early support of Mr. Macron, Meridiam manages 8 billion euros of assets placed in airports, solar installations or hospitals, on behalf of pension funds and other sovereign wealth funds. « Meridiam is a French company, which has a very long-term commitment to the companies in which it invests, and it is specialized in infrastructure projects for public authorities », insisted Antoine Frérot during his hearing. Not enough to reassure local elected officials: « How can an actor who has no experience in water management be able to ensure the continuity and development of Suez ? » asked Senator Jean-François Longeot on November 10. Marc Laimé, journalist specializing in water issues, considers the maneuver to be a « mean trick » : « The fund is closely linked to Veolia, so they will not become competitors, he said. Rather, it will be a new monopoly. »

For Chritophe Lime, president of the France public water network, multinationals are taking a new step: « We are moving from commodification to financialization of water, which is new, since Veolia has undertaken to sell Suez Water to a financial fund… and this is worrying. » Become « merchandise » in the years 1980-1990, would water be on the way to becoming a financial asset ?

Towards a control of the multinational on the ecological transition

With all due respect to M. Frérot, who praises his « ambitious industrial project » and made in France, this operation would first and foremost be « big money question, where what prevails is a logic of investment bankers », according to Marc Laimé. For the specialist, the stake of this merger is not so much the water management market in France as « the influence that the future group will have over all services related to ecological transition » : water therefore, but also waste or energy. All while relying on the concept of « smart cities » or « smart cities » – because they are highly connected. Suez has indeed positioned itself in this sector more quickly than its competitor Veolia: in Dijon, the company has developed « a cockpit connected to the public space equipment of the twenty-four municipalities of the metropolis », in order to « rationalize, optimize and pool most of the technical equipment: traffic lights, lighting, video protection, road services, water … ».

In an article published on his blog hosted by the Diplomatic world, Marc Laimé clarifies his analysis: « In five to ten years, when 5G, the Internet of Things, triumphant artificial intelligence will have colonized everything, it will be a matter of speeding up the installation of a gigantic network of implanted sensors, both among hundreds of millions of individuals served by the group than on the hundreds of thousands of industrial infrastructures in which it operates across the globe. But also in local communities, where the company will support the digital transformation of all activities. »

In front of the senators, Antoine Frérot did not say anything else: « We want to be the first to offer solutions for the ecological transition: reprocessing of electric vehicle batteries, guaranteeing air quality in buildings, carbon capture, he indicated. We also want to be more efficient on the [“digitalisation”|Anglicisme pour « numérisation ».] of our businesses by bringing together the know-how of Veolia and Suez. »

From Quebec, researcher Sylvie Paquerot, administrator of the France Libertés foundation, agrees: « They are no longer water merchants but multiservice giants, she says ) Reporterre. They are involved in all the services that urban areas need: water, waste, electricity, etc. » The risk therefore lies in a stranglehold of these companies on the ecological transition: « The more these new infrastructures are developed by private actors, the less influence the public actors will have on their redevelopment or on their operation, she asserts. The more these companies concentrate expertise and knowledge, the less the public authorities will have the capacity to reappropriate them, or to control them. » In doing so, « citizens have fewer spaces, fewer possibilities to define the course of their life ».

Faced with this concentration of multinationals, « municipalization is the only solution », insists Mme Paquerot: « In a capitalist system, if you want other rules than those of the market and of profit, you have to get out of this economic system, which implies going through politics, choice and democracy. From there, we can create an economic model that works according to other rules. And collectively decide how we want to organize the water. » An opinion shared by Jean-Claude Olivia, elected ecologist and member of the Coordination Eau Île-de-France: « Public management guarantees communities that their interests are respected, he said. It will not be a pension fund or a multinational that will make the decisions. »

« The passage in control makes it possible to affirm a change of paradigm in the vision that we have of water: it is not a resource from which humans benefit, but a common good vital for humanity and the whole alive », emphasizes Anne Grosperrin, vice-president in charge of water at Greater Lyon. Since the arrival at the helm of environmental teams, the metropolis has been working on a remunicipalisation of water, now managed by Veolia, by 2023. In practice, public management places elected officials – and users in the hands of users. – essential choices: what water pricing ? what hierarchy in uses ? what investments ? Rather than distributing dividends, « a community can reinject the margins made in medium and long-term policies, for example against droughts and floods, said Mr. Lime, from France Eau publique. If it wants to set up a pricing policy, it can target it according to social or environmental criteria. »

As a result, only public management will be able to cope with the ecological crisis: « The objective of Veolia or Suez is to sell a lot of water, they are not in a logic of savings », says Jean-Claude-Oliva. Ditto for the preservation of the resource: « Paris water [régie publique de la capitale] subsidizes the installation of organic farmers near collection points, reports the activist. While elsewhere in Île-de-France, Veolia [l’entreprise à laquelle le Syndicat des eaux d’Île-de-France, le Sedif, a confié la gestion de la ressource] prefers to develop and offer sophisticated and expensive technologies to clean up water… It is not at all the same vision of ecology ! »

Begun at the turn of the 2000s, the movement of remunicipalisation has continued to gain momentum since then. « The scandal of Grenoble (Isère) was a warning shot, because we realized that the delegation to the private sector had allowed embezzlement, corruption, mismanagement, says Christophe Lime. But the real trigger was the re-municipalization of water in Paris, enacted in 2009. Then there was Nice (Alpes-Maritimes), which showed that the return to public management could be led by a right-wing community. » Improved service to users, better preservation of the resource: public management is gradually convincing. According to Mr. Oliva, in fifteen years, « we went from 28 to 40 % of users served in public management ». The dynamic continues, since Lyon and Bordeaux (Gironde) have just embarked on the adventure. The possible merger between Veolia and Suez will certainly bring water to the mill: « A number of communities were still hesitant, Mr Lime said. These maneuvers between large companies, like the climate emergency, are pushing politicians to reappropriate water issues. »

These were the details of the news Faced with the giant Veolia-Suez, the public water authority is developing for this day. We hope that we have succeeded by giving you the full details and information. To follow all our news, you can subscribe to the alerts system or to one of our different systems to provide you with all that is new.