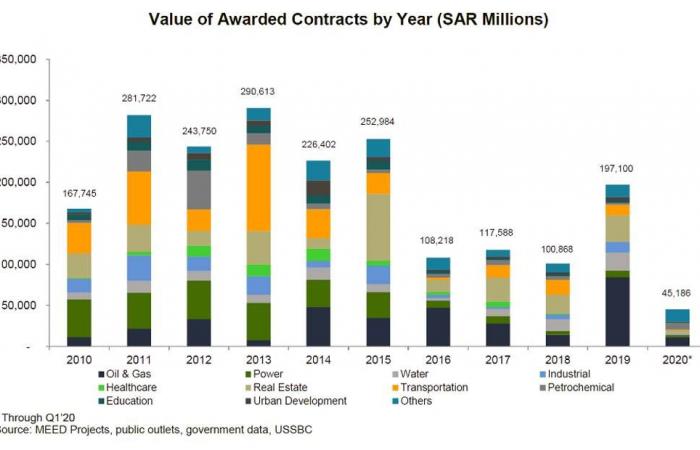 We show you our most important and recent visitors news details Value of awarded contracts reach SR45.2 billion in Q1 2020: USSBC in the following article

Hind Al Soulia - Riyadh - RIYADH — The value of awarded contracts reached SR45.2 billion ($12 billion) during Q1’20 as the momentum that was witnessed in 2019 continued into 2020, according to a report by the US-Saudi Business Council (USSBC). The value of awarded contracts increased by 28 percent compared to Q4’19 but decreased by 8 percent compared to Q1’19.

The USSBC Contract Awards Index (CAI) reached 216.60 points at the end of the first quarter. The increase in contract awards during Q1’20 saw the CAI climb by 3 percent q-o-q as the value of projects slowed during Q4’19. While the CAI ended above the 200 point mark during Q1’20, its streak of seven consecutive months above that level was broken in January.

The oil & gas sector continued its momentum from 2019 as it accounted for SR11.2 billion or 25 percent of awarded contracts. Saudi Aramco continues to award contracts for the development of the Marjan oil field as wells as Safaniya and South Ghawar in the Eastern Province.

Saudi Aramco is poised to continue awarding mega-projects in the oil & gas sector despite the impact of COVID-19 on the economy. The petrochemicals sector rose this quarter after a relatively slow year in 2019. The value of awarded contracts reached SR8.3 billion ($2.2 billion) from two contracts, accounting for 18 percent of total projects. This reflects a significant jump as the total value of awarded contracts in 2019 was SR2.5 billion ($662 million) for the petrochemicals sector.

Judging by the pace of awarded contracts during Q1’20, the construction sector appeared on pace to continue the strong showing that was witnessed in 2019. The oil & gas sector continued to see mega-projects being awarded as Saudi Aramco continued to expand the Kingdom’s hydrocarbon extraction capabilities to meet both local and global demand.

The petrochemicals sector had a significant joint venture that led to the largest awarded contract of the quarter. Furthermore, the military sector awarded two long-term air base projects that is expected to provide numerous employment opportunities to the non-oil sector.

The effects of COVID-19 on the Kingdom’s economy exerted additional strains as health-related concerns were equally met with lowered state revenues resulting from depressed demand for oil. To effectively combat the negative effects of the pandemic, the Kingdom enacted stringent fiscal measures that to date, has amounted to more than SR270 billion ($72 billion) worth of budgetary cuts and stimulus plans (Please see our most recent Economic Brief covering the Kingdom’s policy response to combat the pandemic).

Further mitigation plans include the decision to raise the VAT rate from 5 percent to 15 percent starting in July 2020, which is not likely to provide a sizeable contribution to non-oil revenues in the short-term given current lowered consumer demand for goods and services.

The impact of COVID-19 on the Kingdom’s construction sector is expected to be steep over the next three quarters of 2020. A recent report from the Saudi Contractors Authority forecasted that contracts awards would decline between 20-40 percent over the course of the year.

The IMF forecasts a 2.3 percent contraction in GDP, while it predicts a 4 percent decline in the non-oil sector for 2020. As the Kingdom’s insulates the economy from the effects of the pandemic, the construction sector will be among the most challenged sectors.

The labor intensive nature of the construction sector, which is heavily reliant on blue collar foreigners adds financial strain on contractors to maintain their workforce while also facing mobility restrictions. These challenges have caused hardship on SMEs that are threatened with the lack of necessary funds to maintain their payrolls and access working capital.

The government has stepped in with a new injection of SR36 billion ($9.6 billion) that is aimed at supporting SMEs in the construction sector. According to the Private Sector Stimulus Office, the initiative will support more than 17,500 SMEs in the Kingdom.

Another source of consternation is the challenges faced by commercial banks to withstand delays in loan repayments, thus creating a growing liquidity crunch and an increase in non-performing loans. However, the SR50 billion ($13 billion) injection into SAMA to support the banking sector and SME’s will soften the impact on the financial sector.

“The good news is that the Kingdom’s has initiated opening measures such as easing the stay at home directive, opening shopping malls, resumption of domestic flights on May 31, and inter-province mobility. These measures will gradually lift the economy from the shutdown period and begin the recovery process”, commented Albara’a Alwazir, economist at the US-Saudi Business Council.

“Looking ahead to next quarter, we expect to see a continuation in project awards in the oil & gas sector by Saudi Aramco at the South Ghawar field. The Saudi Water Partnership Company is also expected to award sizeable projects related to desalination projects in Jubail Industrial City.” — SG

These were the details of the news Value of awarded contracts reach SR45.2 billion in Q1 2020: USSBC for this day. We hope that we have succeeded by giving you the full details and information. To follow all our news, you can subscribe to the alerts system or to one of our different systems to provide you with all that is new.