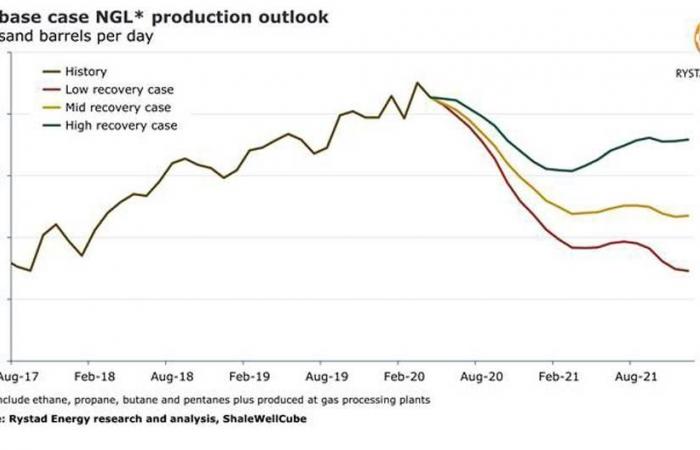 Hind Al Soulia - Riyadh - OSLO — The US output of natural gas liquids (NGL), which reached an all-time high of 5.3 million barrels per day (bpd) as recently as March 2020, is poised for a steep two-year decline, Rystad Energy’s base case view reveals.

NGL production is forecast to fall to 4.4 million bpd by the end of 2020 and reach a nadir of just below 4.2 million bpd a year later.

Despite the overall decline, the Permian Basin is forecast to make an impressive comeback by end-2021 and match its basin-wide record from earlier this year of just above 2 million bpd.

Output from the rest of the US, however, is projected to shrink by about one third during the same time frame, thereby generating an overall expected decline of 1.1 million bpd in total NGL production in the country.

The Permian Basin has been the major driver of NGL production growth in recent years. This growth has stemmed not only from a natural expansion of associated gas output, but also by way of significant investments that have been made into NGL and processing capacity infrastructure.

“We do not expect to see a significant up-cycle in ethane fractionation spreads, as any optimism in the market in the short-term will be balanced out by ethane that is easily available in the existing rejection stream,” sid Rystad Energy’s Head of Shale Research, Artem Abramov.

Moreover, reactivation of curtailments and the resilience of associated gas production in the Permian will provide continuous support to nationwide NGL output. Hence, the Gulf Coast basins are expected to respond quickly and eliminate the need for a substantial increase in NGL output from more remote regions, Abramov added.

In the next few months, we reason that oil production curtailments and a collapse in nationwide frac activity will make the deceleration in NGL output inevitable. However, as we approach the end of 2021, the actual NGL output level will depend on the attractiveness of NGL extraction.

Permian NGL production is set to exhibit lower sensitivity than other basins in all of our scenarios, with an expected year-on-year decline of around 200,000 bpd in December 2020, according to our base case scenario (mid case in the graph).

NGL production in the Permian is also expected to rebound sharply in 2021 in both our base case and high case scenarios.

In our view, a swift recovery of Permian associated gas and NGL production will put a stop to a sustainable increase in ethane recovery in the basins outside of the Gulf Coast. While substantial ethylene cracker capacity is still likely to be added in the US in the medium-term, NGL-exposed producers should not expect attractive ethane prices on a prolonged basis in the future. — Rystad Energy

These were the details of the news US NGL output set to fall by 20% by end-2021 from March’s all-time high for this day. We hope that we have succeeded by giving you the full details and information. To follow all our news, you can subscribe to the alerts system or to one of our different systems to provide you with all that is new. 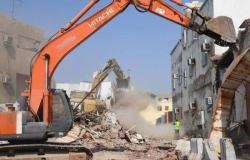