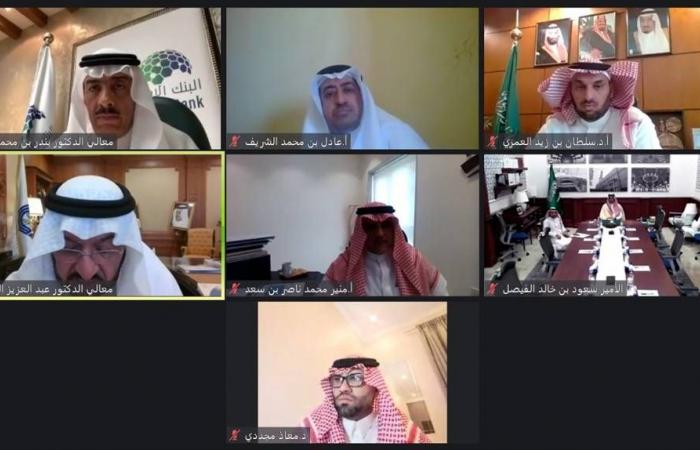 Hind Al Soulia - Riyadh - JEDDAH — The President of the IsDB President Dr. Bandar Bin Hajjar stated that the bank was working on a pioneering project to establish a "Global Waqf Centre of Excellence" in Madinah, with a capital of $50 million. The aim of the center is to build a global umbrella for the Waqf sector, linking and coordinating all those interested in Waqf.

Dr. Hajjar made this statement while addressng the opening session of the virtual workshop on the concept of a post-COVID-19 development program for Madinah. He thanked Madinah Governor Prince Faisal Bin Salman and Prince Saud Bin Khaled Al-Faisal, for their commendable efforts in the field of socio-economic development.

The ISDB chief lauded Taibah University, represented by its Director Dr Abdulaziz Al-Sarrani, for helping organize this event with the aim of preparing a concept for a post-COVID-19 development project for Madinah.

Dr Hajjar emphasised the bank’s eagerness to support development projects in Madinah through all available mechanisms, including the Awqaf Property Investment Fund (APIF), which agreed to fund the Al-Bayan Charitable Foundation for Education (Prince Muqrin University) in Madinah.

This project aims to provide the Foundation with regular income through contributing to the establishment of a 4-star hotel at an estimated cost of $37 million, to which APIF contributes $8.8 million.

Dr Hajjar pointed out that the IsDB established a special Waqf fund for the Kingdom similar to the Global Fund with a capital of SR1 billion. The aim is for the fund to invest in economically and financially feasible Waqf projects, including in Madinah.

He also invited Waqf institutions and the private sector in the city to support this project and take advantage of the opportunities and capabilities provided to those working in the Waqf sector, stressing that the IsDB opened subscription in the fund with an estimated contribution of SR100 million.

In this regard the president stated that the bank was working on a pioneering project to establish a "Global Waqf Centre of Excellence" in Madinah, with a capital of $50 million. The aim of the center is to build a global umbrella for the Waqf sector, linking and coordinating all those interested in Waqf.

The center, he added, would use state-of-the-art technology to provide and facilitate the circulation of information to develop ideas in the Waqf sector, and would also market innovative programmes, projects and initiatives in the Waqf sector so that it can be effective in enhancing the socio-economic impact in member countries through partnerships.

As part of the effort to build institutional and individual capabilities of the Waqf sector, the Islamic Research and Training Institute (IRTI), an IsDB Group member, is preparing to launch the first initiative of the center to grant an approved certificate of Waqf specialist in partnership with the most prestigious international university specialising in charitable action.

IRTI is also working on the “Ish’had” platform, which is an e-platform using blockchain technology, to document and protect Waqf properties. The president pointed to the importance of this step because Madinah is the city with most Waqf properties in the Kingdom, and therefore a considerable percentage of its citizens will benefit from this project aimed at improving and developing performance and thus helping develop the city and create and enhance job opportunities.

He stated that the bank was cooperating with the Ministry of Human Resources and Social Development to establish a fund for the development of the tertiary sector, social investment and economic empowerment in the Kingdom of Saudi Arabia. This is one of the innovative development initiatives launched and sponsored by the bank as part of a set of policies aimed at meeting the development challenges facing member countries.

Dr Hajjar stated that, as part of this initiative, the bank will initiate a study based on value-added chains for the productive sectors in the city, including in particular the date sector, the aim being to support SMEs, develop the production chain and remove the obstacles encountered in the various production phases up to export.

Dr Hajjar stated that the IsDB was willing to cooperate with the Madinah Governorate and with all actors and those interested in the affairs of the city, and contribute the bank’s expertise to support the topics that will be discussed in the workshop, whether through funding studies or through including Madinah in the Bank’s Reverse Linkages Program so that it could benefit from development success stories from other countries, or through helping develop value-chain projects in various impactful and labor-intensive sectors. — SG

These were the details of the news IsDB eager to support development projects Madinah for this day. We hope that we have succeeded by giving you the full details and information. To follow all our news, you can subscribe to the alerts system or to one of our different systems to provide you with all that is new.